Jharkhand Staff Selection Commission(JSSC) is going to conduct a written examination for the 2810 posts of  Police Constable in India Reserve Battalion. The eligible candidates applied for the recruitment through online application until 4th September. The examination is likely to be conducted in the month of Nov/ Dec 2017.

The commission accepted the valid online application for the recruitment examination of India Reserve Battalion Constable Recruitment 2017. All interested candidates who want to join the Police Department have applied and now waiting for the JSSC IRB Admit Card 2017 to be released on time. The candidate will be able to download the JSSC IRB Constable Admit Card 2017 from the official website of the board as soon as they are made available by the commission. 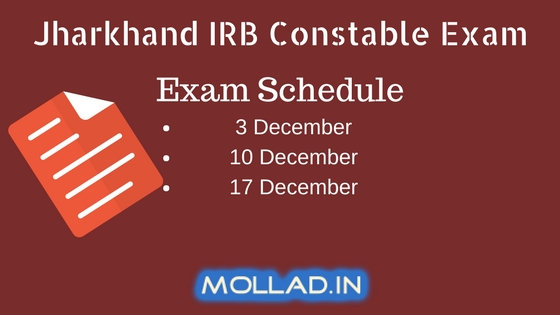 Update: The Jharkhand SSC has released the Examination Schedule for the IRB Examination. Please see the Schedule below

The Commission has arranged the examination centre in all districts of Jharkhand.

The JSSC IRB Admit card can be downloaded from 21 November. The candidates do need to visit the link available below and enter the Application ID & DOB to download the IRB Constable Admit Card.

If any candidate could not download the admit card online, he/she can collect Admit card on 27 and 28 November from the Office of JSSC.

They must bring Application Print out, FEE Receipt and 2 Photographs along with them.

Also, candidates are advised to read the instructions printed on the back of the JSSC IRB Admit Card 2017 before attending the examination. Candidates are asked to bring an Identity Card along with the admit card to the exam center.The aspirants may bring any one of the below-mentioned documents as an ID proof because officials at the examination center will demand an ID proof as to verify the originality of the candidate.