April 1: The online application process has been completed for ALP and Group D As well. According to official Stats the board has received 282 Lakh (2.28 Crore) Applications for both of the recruitments. Out of those 2.12 Crore have submitted final Applications. The RRB Alp Exam Date will be announced very soon.

The Railway Recruitment Board and Ministry of Railways (RRB) will conduct the First Stage Computer Based Test (CBT) for ALP (Assistant Loco Pilot and Technician posts in April-May 2018. The admit cards/hall tickets for the same will be released on the official website of various regions/zones.

Recently, the Railway Recruitment Board has released a notice for the recruitment of Assistant Loco Pilot and Technicians in various zones/circles of Indian Railway. Now, the board will conduct the exams for these posts. The detailed schedule for the CBT and further stages of recruitment will be intimated through RRB’s website. The direct links to various regions/zones are updated below. 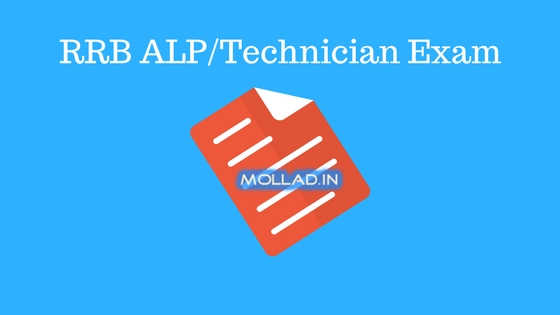 RRB ALP Admit Card 2018 will be released on the official website. The candidates who are going to appear in RRB ALP Exam can download RRB Loco Pilot Hall Ticket 2018 through the links shared below.

The date, time and venue for all the activities viz First stage CBT, Second stage CBT, Computer Based AT and DV or any other additional activity as applicable shall be fixed by the RRBs and shall be intimated to the eligible candidates in due course.

RRB Admit Card for First Stage CBT: The First Stage CBT is of screening nature and the standard of questions for the CBT will be generally in conformity with the educational standards and/or minimum technical qualifications prescribed for the posts. The score of first stage exam shall be used only for shortlisting of candidates for second stage exam as per their merit.

The time duration for First Stage CBT will be 60 minutes. The exam will consist of 75 multiple choice objective type questions on the following subjects:-

Shortlisting of Candidates for the Second Stage CBT exam will be done on basis of the normalized marks obtained by them in the First Stage CBT Exam. A total number of candidates to be shortlisted for the second stage shall be 15 times the community wise total vacancy of ALP and Technician Posts notified against the RRB as per their merit in First Stage CBT.

The Second Stage CBT shall have two parts viz Part A and Part B and total time duration for the test will be 2 hours 30 minutes.

Part A:- The Second Stage Part A exam will consist of 100 multiple choice objective type questions and time duration for the same will be 90 minutes. The marks scored in Part A alone shall be used for shortlisting of candidates for further stages of recruitment process subject to the condition that the candidate is securing qualifying mark in Part B.

The subjects for Part A shall be as below:-

Part B:- This part is qualifying in nature and shall have questions from the trade syllabus prescribed by Director General of Employment & Training (DGET). Candidates with ITI/Trade Apprenticeship qualification will be required to appear in the section having questions from the relevant trade. Candidates holding Degree, Diploma and HSC (10+2) having eligibility for the posts of ALP have to select relevant trade from the list of trades listed against their engineering discipline/HSC (10+2).

The number of question in this part will be 75 and time duration is 60 minutes.

RRB ALP Admit Card & Exam Test Details: The candidate needs to secure a minimum score of 42 marks in each of the test batteries to qualify. This is applicable to all candidates and no relaxation is permissible.

The Computer-Based Aptitude Test shall have questions and answer options only in English and Hindi. There shall be no negative marking in Computer-Based Test.