South Eastern Railway (SER) in association with Railway Recruitment Cell (RRC) has released a notice for the engagement of candidates on Apprentice/training at various Divisions/Units/Workshops over South Eastern Railway. Applications were invited through online mode only for apprenticeship courses at Kharagpur, Chakradharpur, Adra, Bondamunda etc workshops situated at Kolkata division. The candidates will be able to download the South Eastern Railway Apprentice Result from the official website very soon. 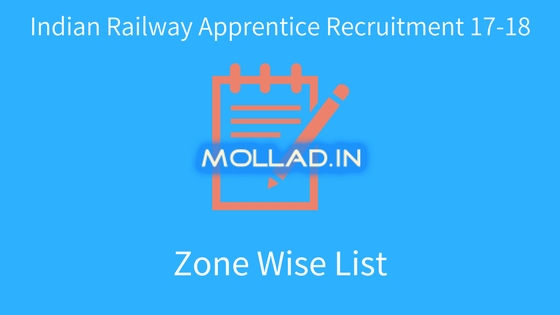 The recruitment board will announce the SER Apprentice Result very soon. The result and merit list will be released on the official website. Aspirants are advised to visit the website regularly for updated information on Zone Wise Railway Apprentice Results for the session 2018-19.

For the purpose of calculation of the percentage of matriculation, marks obtained by the candidates in all subjects will be reckoned and not on the basis of marks of any subject or a group of subjects. For the purpose of calculation of percentage of ITI marks, average marks mentioned in consolidated statement of marks for all semesters of the trade applied.

The South Eastern Railway Apprentice Merit List will be published after the announcement of the results. The candidates will be able to download the selection list/merit list from the official website by the end of February/March 2018.

After the release of merit list, Document verification and medical examination will be held in opted Divisions/Units, as per the Cluster as mentioned in the Candidate’s applications.

Here, we giving a direct link to download and check the SER Apprentice Result & Merit list. The link will be activated as and when the same is released officially. For further information, you can bookmark this page using Ctrl+D on your keyboard.