The OFFICE OF THE DISTRICT & SESSIONS JUDGE (HEADQUARTERS) Tis Hazari Courts, Delhi will conduct the written exam for various posts of Junior Judicial Assistant (JJA), Group ‘C’ very soon. The exam schedule for TIS Hazari JJA written test will be released on the authority’s website. The exam admit cards will be released on the same website. The eligible candidates can download the TIS Hazari Court JJA Admit Card from the official website at http://delhidistrictcourts.nic.in respectively by using the registration details.

A recruitment notice for 288 posts of Junior Judicial Assistants (JJA) in TIS Hazari Court, Delhi has been published on the official website in Nov 2017. The recruitment authority will conduct the written examination for the same in February 2018 (tentative). The candidates will be able to download the TIS Hazari Court Junior Judicial Assistant Admit Card 10 days prior to the written exam date. 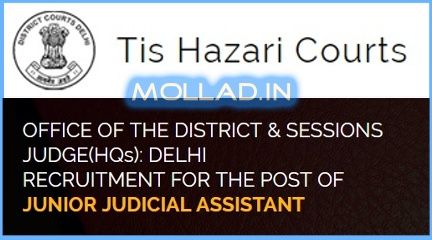 The TIS Hazari Court, Delhi JJA Admit Card can be download from the authorized website by using the application registration number and password. So, the candidates are advised to keep the application form print with them while downloading the exam admit cards.

The TIS Hazari Court Delhi JJA Admit Card will consist of a unique roll number of the candidate. Also, other details like name, photograph, signature, examination venue details and exam timing etc will exist on the admit card print.

Follow the simple steps given below to download TIS Hazari Court Junior Judicial Assistant (JJA) Admit Card 2017-18. The comment section is open for all. If you are still facing any problem in downloading the same, comment the problem in below section. We will try our best to sort out your problem.